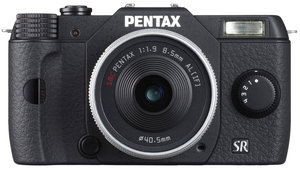 The PENTAX Q10 is based on the popular PENTAX Q (launched in August 2011)  the worlds smallest, lightest digital interchangeable-lens camera.

Thanks to a newly adopted CMOS image sensor and an upgraded algorithm, the camera delivers a much-improved basic performance, such as higher-quality images and faster AF operation. At the same time, it retains all the creative features of its predecessor  including the bokeh control function to create a defocused effect typical of an SLR camera and the Smart Effect modes to apply various filters with a simple turn of the dial  allowing the photographer to produce more personalised images with minimal effort.

While its overall exterior design closely resembles the PENTAX Q, which was designed as a miniaturised version of a full-scale digital SLR camera, the PENTAX Q10 has several upgrades to its body design, such as a special grip for more stable hold of the camera, and improved operability and manoeuvrability.