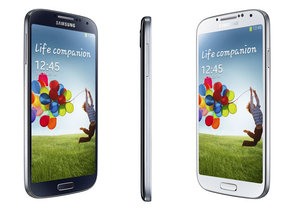 The latest Samsung Galaxy S model, Galaxy S4, has been announced with a new 'Dual Camera' function and a 13 megapixel, Auto Focus rear camera with flash.

The 'Dual Camera' function uses both the front and back cameras at the same time and the photos then appear together, in one shot. Various frame effects can be applied to, as Samsung say, 'blend the two pictures naturally' and also adjust the size of the smaller image that sits inside the other. Its rear 2 megapixel camera can also record full HD videos at 30fps.

12 shooting modes are available including Drama Shot, which captures a burst of shots then combines them into one continuous time-lapse. There's also 'Sound & Shot' mode available which stores sound and voice together as the picture is taken.